Writing about beauty is what this whole blog is about, but sometimes I really have to get raw with my readers and explain things that happen in my personal life. 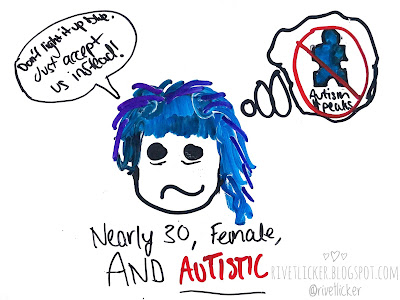 This is not something I have really spoken about publicly on my blog because it may get too personal and people don't like this kind of whiny crap, but I need to vent so much about having Asperger's as an adult.

That word. That term. That disorder. That thing that everybody is scared of their kids being diagnosed with. I'm here to tell you, it's not a bad thing and I can speak for myself on this matter!

I turn 30 in August this year. For nearly 30 years I have lived as a person on the Autism Spectrum, but I've only known that all my odd traits were caused by Autism for 2 years. I got diagnosed with Asperger's when I was 27, after going through some very rough patches with my mental health that required me to seek psychiatric treatment. I found an amazing psychiatrist who I still see today. He also diagnosed me with the co-morbid ADHD, which I am so glad he picked up, because I have finally found an intervention that makes me more productive.

I was a weird kid and I went to school in the 90s. These things weren't picked up back then, especially not in girls. It's almost like the idea of the female Aspie isn't even real. We're different as a breed, but rather than being related to a battle of the sexes in our biology (which is bunk), it was based on an unfair gender construct where girls are just anxious. We exist, we're just a little better at social imitation.

Flying under the radar of neurotypical but weird is kind of a real bummer, because you're expected to do things the way society sets them and get chastised when you deviate. People would say my head was in the clouds or that I was lazy. Well, my head is somewhere that is not in the now or in the three dimensional space I am currently occupying. I feel like I live away from the world in my own time and space. I get things done, but I do them the way that suits me best.

Sure, routine is great, but I'm not fitting of that stereotype. I am very sensitive to change, though. Change can also be good, but I take more time to adjust to it than the average person.
I could never look anybody in the eye while speaking to them. I preferred to stare into blank space to avoid a sensory overload. I literally cannot look somebody in the eye and have a conversation because it distracts me from what I have to say. I eventually forced myself to look into people's eyes, it did not come to me naturally. Holding conversations aren't my strong point either.

I don't remember faces or details very well unless there is a very distinct detail. I could have seen you before and spoken to you, but meet you again a week later and completely not recognise you. I don't remember dates or specific details such as statistics very well.

Loud noises and flashy lights muck around with my head, the fatigue rolls in like a fog. Then there's reactions to people yelling at me. Prior to being treated for my severe anxiety, I would have meltdowns where I would scream for an hour and thrash myself against the wall. My meltdowns these days are just be being very crabby and sweary, and less Hulk-a Smash-a.

My brain is a divergent. I'm taking medications. I'm not broken. I'm a f**king human being.

I have really good spatial and directional intelligence. Organic chemistry is something I enjoy a lot because molecules have 3D geometries, and a shift in geometry can change the properties of a molecule. Being able to rotate and flip molecules in my head is a skill not everybody has naturally. I understood the concept of a trajectory before I knew anything about physics. Surely enough, a lot came out of playing video games, but it just felt like I knew where to point my character and when to jump, and know where they'll land.

I am very dextrous. If I'm calm and not shaking, I can assemble a circuit board with surface mount components and solder them down. I worked as an electronics technician, so soldering was a skill I picked up. I made a lot of wigs and hair pieces out of foam, tubing, and ribbons before I turned to beauty and makeup. Cutting foam into even strips is an art! I'm just really surprised I didn't wind up with a sewing machine. The hair side of things runs in the family, as does sewing and other needlecraft hobbies.

I'm musically inclined. I might not be actively writing any music now, nor am I any good at playing keyboards or singing, I still have the natural aptitude for music, via my ears. I can distinguish and isolate elements of music in my head. I know when I listen to Nine Inch Nails, I can hear many elements that would blend as a whole to the average listener, and sometimes I hear new things I never heard before that make up the atmospheric elements of the track, but then again, Trent Reznor is a genius that hides little sonic Easter Eggs in his tracks.

I have a science brain. I'm good at figuring things out more so than remembering them. I did quite well in Boolean Logic, even though I wasn't very good at programming languages. I can work out definitions from using root words. I got into university based on an aptitude test, rather than my academic merit (which kind of sucks because I didn't finish anything).

Writing. Words are my thing. I write better than I speak verbally. Sure, I sometimes find it hard to find what I need to say, but I eventually do. Believe me, if I had any intent to hurt anybody, I wouldn't feel guilty if I said something before my brain had time to process the moral implications.

+ You cannot tell me that my Autism doesn't make me the person I am. It does.

+ My Autism doesn't make me less worthy of respect when I tell you I am different.

+ My Autism will ALWAYS be with me.

+ If your kid is diagnosed with Autism, they will grow up to be Autistic Adults.

+ We have so much to offer, but understand we can't do it in your timeline.

+ I urge my readers to not support Autism $peaks, they don't help Autistic individuals so much as try to erase our traits in future generations.

Lara Schilling
An early 30-something, Sydney based Beauty Editor and Doggospotter. Creator of the most comprehensive Australian Retail Cruelty Free Brand List.